With the high dome, the first one that was built in Naples and the elegance of the structure, the church of Santa Caterina in Formiello dominates the group of buildings of the sixteenth century, that create a Rinascimental atmosphere in Naples.

The most beautiful part of the monument is absolutely the side:it is developped on two extension, on them appear the system of corinthian lesene of piperno, that corresponds to the internal development of chapels; among the lesene we have the tabernacle windows with triangular pediment. In the end we have a trabeation of piperno that close the first order. Moreover we have four vault that connect the two orders, in contrast with the central nave.

The front has a tripartite layout like the controriformist churches. Related to the transept tambour-dome system, the doubling of lesene advise the main internal spaces; while the great circular window it’s the same on the opposite absidal wall and on transept wall, underlining the boards of the cross vault. The marble baroque gate it’s on the sixteenth century front: two corinthial columns support the tympanum, and from a recess appears the figure of Santa Caterina.

The current building appears on a previous church devoted to Santa Caterina d’Alessandria, who was martyr and virgin. Close to the convent of Frati Celestini, it was called a Formiello, because in the city penetrated the ancient aqueduct Bolla. The church was situated in the neighbouring of the city, into the new Aragon walls.

Thanks to the king Frederic of Aragon, the church of Santa Caterina had a new history. In 1498 the king gave it to Dominican monks of reformed confraternity of Lombardy’s congregation. They built the current church and the had it until the 1809, when Joachim Murat decided to demolish it.

The construction of the church of Santa Caterina in Formiello, with clear tuscan influences, was started at the begin of sixteenth century by Romolo Balsimelli, a settignan architect. The church was completed in 1539; later, in 1659, Francesco Antonio Picchiatti made the gate decorated with the sculpture of Santa Caterina.

Around the end of seventheenth century, the central nave had drastic restorations, that didn’t altered the original rinascimental lines, moreover were added modern decorations. Facing to the entry there is the monumental aedicule of San Gennaro made by Ferdinando Sanfelice, the chest of the saint was made by Domenico Antonio Vaccaro and the angels on the top were made by his father Lorenzo. 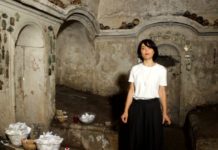 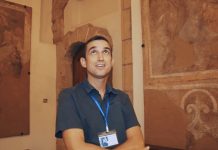 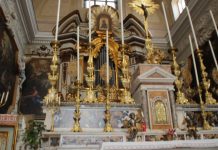